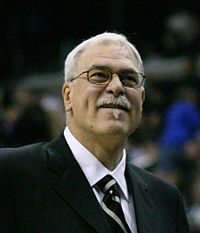 Jackson is widely considered one of the greatest coaches in the history of the National Basketball Association (NBA). He was the head coach of the Chicago Bulls from 1989 until 1998, during which Chicago won six NBA titles. His next team, the Los Angeles Lakers, won five NBA titles from 2000 until 2010. Jackson is known for his holistic approach to coaching that is influenced by Eastern philosophy, earning him the nickname "Zen Master".

‘Good teams become great ones when the members trust eachother enough to surrender the “me” for the “we”.’

Our whole social structure is built around rewarding winners, at the perilous expense of forsking community and compassion. The conditioning starts early, especially among boys, and never stops. “There is no room for second place,” the late coach Vince Lombardi once said. “It is and always has been an American zeal to be the first in everything we do, and to win and to win and to win.” How can anyone, from sports figures to entrepeneurs, possibly maintain their self-esteem when this attitude dominates our cultural mindset?

Today’s NBA players have a dazzling array of individual moves, most on which they’ve learned form coaches who encourage one-on-one play. In an effort tot become “stars”, young players will do almost anything to draw attention to themselves, to say “This is me” with the ball, rather than share the limelight with others. The skewed reward system in the NBA only makes matters worse. Superstars with dramatic, eye-catching moves are paid vast sums of money, while players who contribute to the team effort in less flamboyant ways often make close to the minimum salary. As a result, few players come to the NBA dreaming of becoming good team players.

Selflessness and compassion where the secrets to success

When I was starting out, I, too – like the young, brashJordan– thought I could conquer the world with the force of my ego, even though my jump shot needed some work. Back then I would have scoffed at anyone who suggested that selflessness and compassion where the secrets to success. Those where qualities that counted in church, not muscling under de boards with Wilt Chamberlain and Kareem Abdul-Jabbar. But after searching long and hard for meaning everywhere else, I discovered that the game itself operated according to laws far more profound than anything that might be found in a coach’s playbook.

It took a long time for Michael to realize he couldn’t do it all by himself. Slowly, however, as the team began to master the nuances of the system, he learned that he could trust his teammates to come through in the clutch. The turning point was a game against the Utah Jazz in 1989.Utah’s John Stockton was switching off to double-teamJordan, leaving John Paxson wide open. So Michael started feeding Paxon an John scored 27 points. Michael realized that night that he wasn’t the only money player on the team. It was the beginning of his transformation from a gifted solo artist into a selfless team player.

I flashed back to 1989 when I took over as head coach and had talked to Michael Jordan about how I wanted him to share the spotlight with his teammates so the team could grow and flourish. In those days he was a gifted young athlete with enormous confidence in his own abilities who had to be cajoled into making sacrifices for the team. Now he was an older, wiser player who understood that it wasn’t brilliant individual performances that made great teams, but the energy that’s unleashed when players put their egos aside and work toward a common goal. Good teams become great ones when the members trust eachother enough to surrender the “me” for the “we”.

Though there are occasions when a firm hand is needed, I learned early that one of the most important qualities of a leader is listening without judgment, or what Buddhists call bare attention.

I find that when I can be truly present with impartial, open awareness, I get a much better feel for the players’ concern than when I try to impose my own agenda. And, paradoxically, when I back off and just listen, I get much better results on the court.

In Zen it s said that the gap between accepting things the way they are and wishing them to be otherwise is “the tenth of an inch of difference between heaven and hell.” If we can accept whatever hand we’ve been dealt – no matter how unwelcome – the way to proceed eventually becomes clear.

My first act after being named head coach of the Bulls was to formulate a vision for the team. I had learned from the Lakota and my own experience as a coach that vision is the source of leadership, the expansive dream state where everything begins and all is possible.

6. How to get the most out of a group

When a fish swims in the ocean there is no limit to the water, no matter how far it swims.

When a bird flies in the sky, there is no limit to the air, no matter how far it flies.

However, no fish or bird has ever left its element since the beginning.

This ancient Zen teaching holds great wisdom for anyone envisioning how to get the most out of a group. Just as fish don’t fly and elephants don’t play rock and roll, you can’t expect a team to perform in a way that’s out of tune with its basic abilities.

In other words, you can dream all you want, but, bottom line, you’ve got to work with what you’ve got. Otherwise, you’re wasting your time. The team won’t buy your plan and everyone – most of all you – will end up frustrated and dissappointed. But when your vision is based on clear-sighted, realistic assessment of your resources, alchemy often mysteriously occurs and a team transforms into a force greater than the sum of its individual talents.

Visions are never the sole property of one man or one woman. Before a vision can become reality, it must be owned by every single member of the group.

Doug Collins had kept the young players, especially Scottie Pippen and Horace Grant, on a tight train, frequently yelling at them when they made mistakes. Throughout the game they’d look over at the bench, nervously trying to read his mind. When they started doing that with me, I immediately cut them off. “Why are you looking at me?” I’d ask. “You already know you made a mistake.”

If the players were going to learn the offense, they would have to have the confidence to make decisions on their own. That would never happen if they were constandly searching for direction from me. I wanted them to disconnect themselves from me, so they could connect with their teammates – and the game.

When I was a player, not surprisingly, my biggest obstacle was my hyperactive critical mind. I’d been training by my Pentecostal parents to stand guard over my thoughts, meticulously sorting out the “pure” from the “impure”. That kind of intense judgemental thinking ­– this is good, that’s bad – is not unlike the mental process most professional athletes go through every day.

Everything they’ve done since junior high school has been dissected, analysed, measured, and thrown back in their faces by their coaches, and, in many cases, the media. By the time they reach the pros, the inner critic rules. With the precision of a cuckoo clock, he crops up whenever they make a misstake.

We show players how to quiet the judging mind and focus on what needs to be done at any given moment. There are several ways we do that. One is by teaching the players meditation so they can experience stillness of mind in a low-pressure setting off the court.

Many coaches are control-oholics. They keep a tight reign on everyone from the players to the equipment manager, and set strict guidelines for how each person should perform. Everything flows from the top, and the players dare not think for themselves. That approach may work in isolated cases, but it usually only creates creates resentment, particularly with the NBA’s young breed of players, who are more independent than their predecessors.

Other coaches are far more laissez-faire. Feeling helpless about controlling their players, who generally make much more money than they do, they give them total freedom, hoping that somehow they’ll figure out a way to win on their own.

Our approach is to follow a middle path. Rather than coddling players or making their lives miserable, we try to create a supportive environment that structures the way they relate to each other and gives them the freedom to realize their potential. I also try to cultivate everybody’s leadership abilities, to make the players and coaches feel that they’ve all got a seat at the table. No leader can create a succesful team alone, no matter how gifted he is.

Nothing can upset my sleep and wither my strenght like the do or die situation of the NBA playoffs.

The mind is overstimulated, and one wakes with thoughts and ideas at the crack of dawn and tosses and turns at night thinking about missed opportunities. The process of clearing the mind through meditation is a priceless practise.

The point of Zen practise is to make you aware of the thoughts that run your life and diminish their power over you.

The form of zazen I practise involves sitting completely still on a cushion with the eyes open but directed downward and focusing attention on the breath. When thoughts come up, the idea is not to try to blot them out or to analyze them, but simply to note them as they arise, and to experience, as fully as possible, the sensations in the body. When you do that regularly, day after day, you begin to see how ephemeral your thoughts are and become acutely aware of your bodily sensations and what’s going on around you – the sound of the traffic in the distance, the smell of the flowers across the room. Over time your thoughts calm down, first for a few seconds, then much longer, and you experience moments of just being without your mind getting in the way.

The more skilled I became at watching my thoughts in zazen practise, the more focused I became as a player. I also developed an intimate knowledge of my mental processes on the basketball court.

Sitting in zazen, I learned to trust the moment – to immerse myself in action as mindfully as possible, so that I could react spontaneously to whatever was taking place.